I Survived CKB - but only just!!

Sunday’s Show was a hot and exhausting day (erecting road signage at 4.50am!) but well worth it.  Here’s a couple of “snaps” and I’ll get a better selection posted over the following days as this little froggie is all tuckered out!
Good fun, great company and blinding sales – what more could a man want?
Posted by Unknown at 02:32 No comments:

With the Celebrating Kent Bonsai Show only a few days away here's a selection of some of the 50+ plantings that I will have for sale at the event.  They may not be of the standard that will be at the Magical Bonsai Accents Show in Bristol the same day but I hope that some of them will find a good home - if not, I'm more than happy to keep them!!

Student to Speaker in the blink of an eye

After hot footing it back from Les’s place it was a quick car dump and re-load as I was “booked” to do a talk on Accents and Show preparation at the Maidstone Club.  Fortunately I didn’t need to worry about eating as I was still feeling quite full from the stew that I’d had earlier and this was a godsend as my feet hardly touched the ground when I got home.

Realistically, what I know about Accents plants can be written on the head of a pin so the plan of attack for the evening was to try and look like I know what I’m talking about & blag it!  I managed to get quite a bit of set-up done before too many members arrived but then it was a bit manic catching up with people etc.  As the May meeting had to be changed to a Friday because of the Bank Holiday I wasn’t too sure on numbers but I was pleased with the attendance.  Mind you, some things don’t change with Les “moaning” that I hadn’t made him a coffee after all the cups of tea he had made for me.  Blooming cheek, I made him one at the previous meeting and he didn’t even drink it.  OK, he was in the Wirral at the time, but I didn’t forget him!

Well the result was a very interactive and fun meeting which seemed to be enjoyed by all.  I don’t know if they will ever invite me back again although I did get 1 commission planting to make for CKB so I must have impressed at least someone!
Posted by Unknown at 12:57 No comments:

A day with Trev & the Cyclops 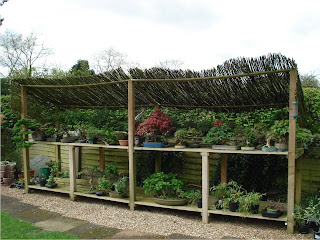 On Friday I was lucky enough to have a fantastic “Bonsai day” with Trev’n’Cyclops (aka Peter Warren & Les Storey) in sunny Ashford.  Les had invited Peter along to help him with preparation of his trees for Celebrating Kent Bonsai at the end of the month and I was kindly invited along.  As is the norm when I’m working I didn’t take too many photos (even though I intended to) but here’s a few of the benches and the boys getting stuck in. 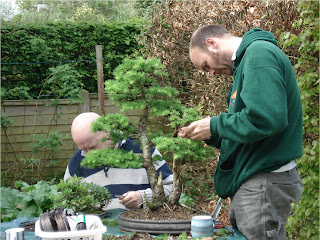 With Peter doing most of the work, Les put his Issac Hayes* hat on and treated us to Bacon Butties and a fantastic Beef Stew with cobblers – that’s the dumplings, not Les’s banter! – and lashings of tea throughout the day (more on that later). Unfortunately the day passed too quickly and for me it was time to disappear, do a Wonder Woman twirl (not a pretty site!) and prepare for the evening’s entertainment.

Overall I did manage to learn a hell of a lot, either working on the 3 trees of my own that I took along or the various trees that Trev worked on.  Thanks again Les and Peter for a fun day!

Who do you think you are – Stirling Moss? 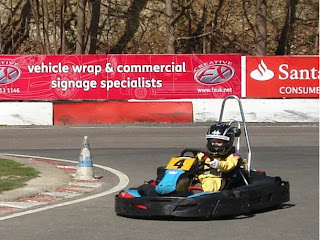 Stirling does take after daddy when it comes to racing cars.  Hooked, along with his sister, at a very young age he always seemed to have quite a good aptitude for karting.  Well this year as a birthday present we got him a day’s training and practice at Buckmore Park near Chatham.  Over the years it has had many a future Formula 1 star grace the circuit including current British stars Jenson Button & Lewis Hamilton.  Time for the next generation to have a stab!

Safety equipment and briefing complete it was time to walk the track and try and learn the racing line.  Before too long his time had come to taste the speed of a 30mph kart for the very first time.  The sessions were fast and furious, sometimes too furious, but Stirling gradually improved to set a best lap time of the day of 41.03sec.  This compares to the best of the day by anybody (his group included drivers up to 13 years old) of 36.54sec.  Not quite the Senna pace but he was 11th out of 18 students so we were pretty happy!

Footnote
Stirling had his first ever “Rookie Races” over the Bank Holiday weekend and although he was nowhere near the standard of the other drivers there he learnt a lot.  One think he did pick up really quickly was the waving to the crowd on the rundown lap after the Final.  Better luck next time son.
Posted by Unknown at 09:44 No comments:

Back in the Saddle

I can’t believe that it’s been a full six weeks since I posted anything here. This time of year is always a bit busy with birthdays, Easter Holidays and the like but this year has been even more chaotic with all the work involved with CKB later this month. Suffice to say all seems to be progressing well and let’s hope for some good weather and plenty of punters through the door.

Of late the SUTEKI Accents side of things has been taking up as much, if not more, of my time as CKB. Making new pots, sourcing interesting plants and all round stockpiling of material is being to make “my” part of the garden resemble a commercial nursery! Let’s hope that some of my new creations find a new home later in the month. Not so much later in the month, Friday to be exact, I’ve got a Bonsai “double header” with a day’s workshop with Les under the guidance of “Our Trev” (Peter Warren for the non-BSA readers) followed by a talk at the Maidstone Bonsai Club about Accents and Show preparation. Should be an interesting evening as what I know about either could be written on the back of a postage stamp.

Any-ho, lots to report (and hopefully show you) over the next few weeks if I’ve not had a nervous breakdown by then. Thanks for your patience!
Posted by Unknown at 07:11 No comments: