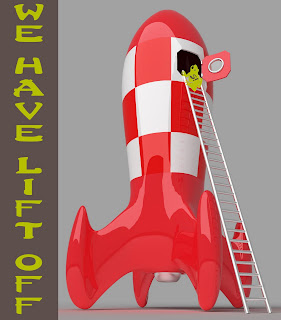 The Glazing and firing is all done on all my pots so it's "T-6 Days" to Blast Off for my Website.

Some of the results are really exciting so lets hope that I can compliment the Pots with some interesting Plantings. The proof will be in the pudding but not too long to wait now!!
Posted by Unknown at 01:54 No comments:

Whilst Andy was preparing my priceless pots (yeah, right – get a grip!) it was time to move my thoughts from clay & glazes back to Bonsai – at least for a short while. Last weekend was the joint Show by Kent and Maidstone Bonsai Clubs at the Kent Bonsai & Azalea Show at Yorkletts, near Whitstable. As Chairman of t’Committee I, along with other MBS Club members, were there to support the event, showcase our trees and maybe pick up a few new members along the way. Personally though it was a chance to escape the kids and have a snoop around the nursery for a bargain!! I actually went to the nursery on the Friday before, as I wasn’t too sure what time I could get there on Saturday, as I had the Club show box etc. Any-ho, I found a lovely yamadori Hawthorn (see below) for a song and left it there to “reduce” the following day.
Saturday dawned and due to a change of chores by Mrs Wife overnight I was able to leave bright and early to help with set-up (keep telling yourself that Simon – you know you only wanted to play with your new tree!!). We were really lucky as the sun was out and the wind was slight so in two shakes we were ready to rumble. There were some lovely trees on show and I think the MBS did themselves proud as although we were a bit thin on the ground people and tree wise the overall display looked very good – even if one of our own was seen batting for the other side – LOL. 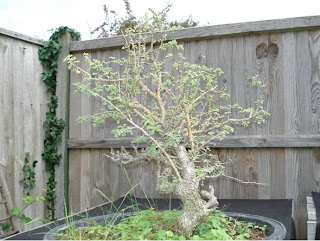 After plenty of banter, snooping, bartering over purchases, and all round light hearted fun I finally got around to decapitating my latest purchase. Shock and horror from some of the visitors as my saw made short work of the trunk but all agreed that the tree is better for it. It was very strange to have strangers watch, and photographing, me work. I like to think I’ve got a reasonably handle on what I’m doing and although I come from Bearsted for sure Kevin Wilson I ain’t!! After a while it was if I was on my own so when Marc and his good lady wife (sorry I’m rubbish with names) produced her latest “handbag” I was quite shocked. They had just brought an old Literati Hawthorn with its own built-in carrying handle and asked me to cast my eye over it. The price was good and the tree had potential so I gave Marc a few pointers on where I thought he could go with styling the tree, little knowing that they were actually asking me to style it for them!! Stainless snipped and shimmered in the sunshine and showers (oh, get me all poetic) making me and my un-kept hair at the moment, look like a cross between Edward Scissorhands and a very short lumberjack. After much chatter, laughter and explanation, along hundreds* of photos taken by a nervous owner, the tree was ready for a few chores for Marc to complete before our next Club meeting.
(*OK, could be slightly less but she seemed to be “clicking” for ages!!)
I’m sorry that I can post any images at the moment as I’ve not quite mastered the art of walking and talking yet let alone photos and pruning. As soon as I get some from the happy owners of the tree (I hope) I’ll post them here but in the interim just let your imagination run riot – Chanel meets yamadori!!
Posted by Unknown at 11:25 1 comment:

Something Brewing - and it ain't Tea!!

Apologies for not posting for a while, where has all the time, and the weather, gone? “Shohin Off” at Willowbog and the Best of British Bonsai in Birmingham, amongst other events, have all been and gone and not a peap (or should that be “plop”) from the Suteki frog!! Well, there have been stirrings in the Suteki Shed (and not all of them curry or Bonsai related) and the time is almost nigh to let the Ribbit out of the bag (terrible pun I know – it’s been a busy few months!!)
Following a conversation with Mr Stone Monkey, a seed was sown which is now starting to sprout. A mutual friend of our used to create Accent plantings but gave up on it so it was suggested that as a way to maybe earn a few bob it was something that I could turn my hand to. Not long after this I was sitting there, clay in my hands ready for the off. After much trial and error (and wine) my 1st ever batch of pots were ready to be fired. Now we wait with baited breath..................... 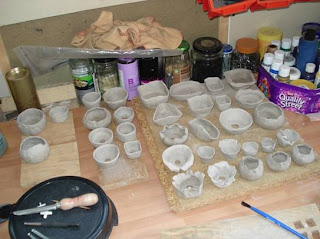 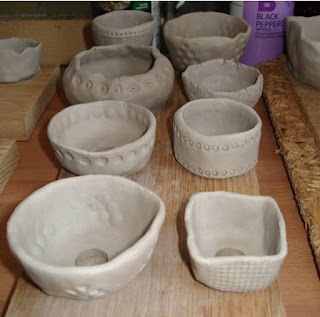 All being fair in love & war my “efforts” should be available from all good retailers, OK my website (see link) and m’shed, at the end of this month but I’ll do my best Gordon the Gofer and announce when they are “Going Live” as soon as the Stone One tips me the wink.

On the the left some of the pots drying out before they were bisk fired.  Not a bad first stab at it but there is plenty of room for improvement!!  Admittely my pots won’t have the Panache of Pitt, the Brilliance of Barton or the Sexiness of Stone Monkey but they will have a little bit of me in them (weather you like it or not!) and when I’m dead and gone my froggy pots will still be around - I hope!
Posted by Unknown at 03:50 1 comment: