It’s nearly time to forget about Bonsai and pots, dust off the leaky tent, dig out the wellies (it is British Summertime after all!) and make our way to the Silverstone Classic 3 day weekend. The Haddon Clan has been twice before and had a total blast (from the past) as the Classic event is “Flat Out Fun for all the Family”. The weekend is the World’s biggest Classic Motor Racing Festival, with around 800 fabulous and exotic race cars competing – yeah I mean RACING plus 1,000’s of Classic cars to droll over. The fantastic thing about this event is the ‘Access All Areas’ policy which means you can get up close (and sometimes sit in if you’re young and cute – counts me out) sit in the cars hot off of the track. The total openness of the weekend allows you to meet great drivers like Stirling Moss and top motorsport celebrities like my mate Muddy Talker!!
There is also FREE musical entertainment, aerobatic displays (including The Parachute Regiment Freefall Team – The Red Devils), a Period Fun Fair, Go-Karting, Shopping……..… I can feel my wallet screaming already!! Friday night should be a real blast with music from Legend (the Bob Marley experience), Queen On Fire and The Rolling Stoned, with legendary 70s acts Suzi Quatro, 10cc and Wishbone Ash on Saturday night. Now, where are m’flares!!
What I am really looking forward to though, apart from seeing the new Silverstone Wing and GP layout, is getting away with the family for a few stress free days (hopefully). This will be the start of the kids Summer Holidays and here’s hoping for good weather, well behaved children and loads and loads of FUN!!
Posted by Unknown at 05:04 No comments:

The Frog getting Funky or The music behind my madness!!

It’s funny how thoughts pop into your mind when you’re Clay-dreaming. Whilst checking on the condition of my latest batch of pots that were drying, I notice subtle differences in them and then looked at the CD’s pilled in the corner of my workshop. Mmmm, could this be the answer? Now don’t get me wrong the Frog isn’t trying to get all philosophical here but there does appear to be music in my madness!!
To me clay seems to be a living, breathing creature that needs nurturing to bring out the best (or the best I can do) in it. Casting an eye over what I have produced and the pots in various stages on my benches a musical theme seems to run through them. The more Chilled & Psychedelic music I listen to the more at peace I am and the more “formal” and involved the designs, the more upbeat and frantic the music the looser the design and finish. Strange but true. I can almost now look at a pot and tell you whether it was made listening to The Velvet Underground or Green Day!!
Glazing, to me, seems to be the opposite. The more “crazed” I get the more fluid and funky the finish. Although I’m inspired by Japanese pots my “style” is more eclectic getting inspiration from the internet and even the TV. I was watching a programme on Formula 1 the other evening and got the idea and colour for a glaze splash from the shape of an old ripped sticker on the lens of a F1 snapper!! I really love messing with colours but sometimes have to leave the Sex Plimsolls behind and go for something a bit softer to get that formal finish to one of my “chilled” pots.
So there you have it, for what it’s worth. Music is the food of love and it appears pots. Am I strange or just misguide, I’ll let you be the judge of that but what’s the worst “noise” to create to............... the sound of silence!!
Posted by Unknown at 03:01 No comments:

“Surfs Up!” the cut-price Cornish Tamarisk 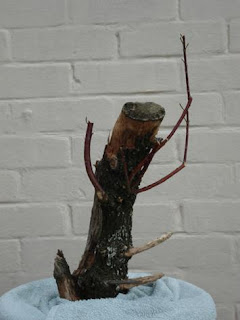 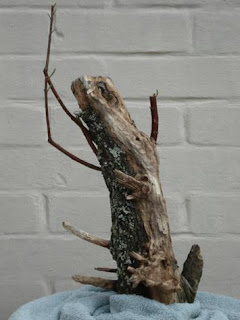 This tree is fast becoming one of my favourites, although it’s a pig to work on, so I would like to share it with you. In the Autumn of 2008 this was the ugly duckling of our Club auction so I thought I’d give it a home. It came via Cornwall to Stone Monkey Mansions via a pot trade. Warned by many knowing(?) members that I would be taking on a bush I stuck by my guns and I’m glad I did.
For 18 months this tree lived in a washing up bowl but survived, unlike Andy’s, so last April I felt brave enough to have a crack at it. As you can see not too much to get the bloody pumping. As I had never really taken on any carving before I thought I’d have a go at the first block carving. Happy with the initial result I attempted, badly, at putting some shape and structure into the tree. Later that year at a Club workshop Andy & I got into trouble as he brought out the heavy guns to tackle the larger deadwood areas that my little dermal couldn’t handle. After a few “breaks” to let the tea and biscuit brigade have a natter the work was done. 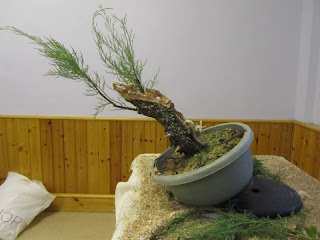 Fast forward to 2010. More work was done on the structure with all sorts of contraptions to try and get the braches to weep. She’s coming on nicely but desperately needed a re-pot the following Spring.
Re-pot and new planting angle complete, well almost, here’s where we are as of today. Still a long way to go but the more I’m understanding this tree the more it is improving. The deadwood needs refinement, which I’m hoping to tackle soon but I love the forward movement that we have got into it already making it look like waves crashing on the beach or the horses from the Guinness advert. For those non-UK residents, google it!!
I’m going to take it to our next Club meeting just to show what can be done for a fiver with patience, determination and a few power tools!! Thanks for looking,
Regards,
Simon
Posted by Unknown at 12:04 No comments: